Just before Christmas the 3rd annual ‘Digital Culture’ report was released, this is a longitudinal study looking at the adoption and impact of “digital technologies” in the arts sector.

There seem to be a number of idiosyncrasies with the survey, namely that it tries to force everything into little Arts Council shaped boxes that have come straight off a funding application, also that the number of participants that have participated in all 3 years (240ish) is far fewer than those who have just participated in 1 or 2 of the years (350) – which renders longitudinal comparisons slightly tricky. But leaving all that aside, I read the report and have vomited up some thoughts on it all below. Something perhaps worth noting, I have only read the report, I haven’t taken a look at the raw data, thus my observations are made on the assumption that the analysis in the report is correct.

Digital is apparently becoming less “important” for arts organisations, everyone seems to see it as a marketing thing and not much more than that. Those that are making the most of digital are those with more money, particularly NPOs who seem to be leaving the rest of the sector behind somewhat.

“National Portfolio Organisations (NPOs) are more digitally active, experience fewer barriers, have better access to skills, are more likely to be engaged in R&D activities, and are more likely to report positive impacts. There is also evidence that the gap between NPOs and the others is widening”

The above, not-really-all-that-surprising, quote is the main thing that jumped out at me (and seems to be the main thing that others have picked up on). Unfortunately this seems to be becoming applicable to more and more aspects of arts organisations’ activity, this probably points to deep-rooted funding inadequacies and entrenched sectoral issues but I’m not really qualified to answer either of those particular problems.

If you look at the “factsheets” for each artform covered in the survey it would appear that “business models” and “distribution are the two things that the organisations perceive “digital” least important for. Pretty much everyone says that it is “most important” for “marketing” and most artforms also seem to stick “archiving” in the “most important” box (I’d argue there could or should be a fairly tight link between distribution and archiving but hey ho, these are the labels they’ve gone with).

Interestingly, or misleadingly, the executive summary presents this as “Digital technologies have also become more important for revenue generation, with 45 per cent of organisations now reporting that this is important to their business models, up from 34 per cent in 2013” i.e. most organisations in the study do not see digital as important to their business models (which Chris Unitt explores, under the wider scope of “digital leadership” a bit here). 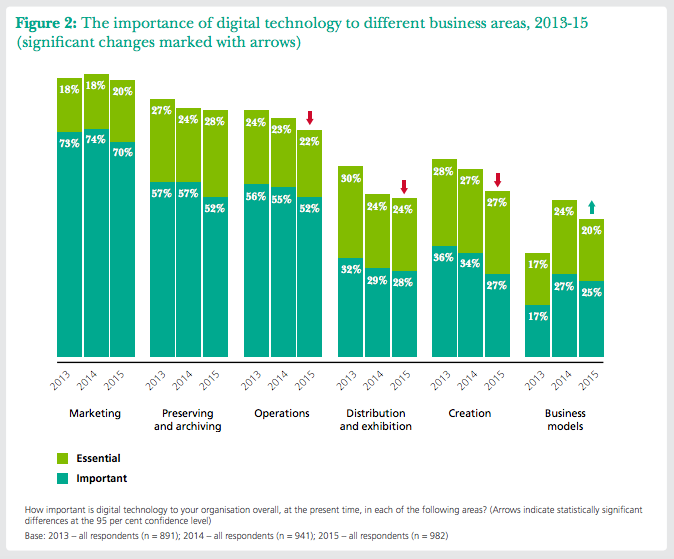 The depressing thing is that the Digital R&D Fund for the Arts (which conducted this report) clearly sees these things, particularly business models and revenue generation as the more important areas for the sector to try and focus on (judging by both the “guides” on the homepage of their website and the premise of the Fund i.e. “supports ideas that use digital technology to build new business models and enhance audience reach for organisations with arts projects“) so this points to either a failure on the part of the Fund or the sector in this area. Either the Fund failed to push money towards the right projects to achieve its aim of proving new business models that are adoptable and adaptable across the sector or the sector has proven itself incapable of understanding and utilising the findings that these funded projects have thrown up (I suspect it’s a little of both).

Basically, no-one has any money and this is stopping people from doing things. And the only people who do have money are the people who have loads of (or at least more) money anyway, for everything (i.e. NPOs, specifically the bigger NPOs):

Perhaps related to the above was the finding that “respondents report a number of organisation-related factors which might inhibit use of digital technologies. More report there being no senior digital manager in their organisation, IT systems being slow/ limited and there being a lack of suitable external suppliers“. I think the first part of this is most important, if there is no senior, or at least dedicated, digital person in an organisation then digital is never going to get the attention or understanding that it requires (this also relates back to Chris Unitt’s post that I linked to early on digital leadership) and if an organisation has very limited funds then they’re not going to free up space on the payroll to employ a dedicated digital person – this issue is even further exacerbated when digital is seen as not important to business models and/or revenue. It’s hard to make a case for something that you don’t believe will have any impact on the bottom line when funds are tight. The point around there being a “lack of suitable external suppliers” is, frankly, untrue. Although if people are reporting this then clearly work needs to be done around making organisations more aware of the numerous, talented suppliers out there (although, again, if you have no dedicated digital resource looking at this then of course your understanding of the options available is likely to be limited or non-existent), everyone’s favourite Chris (Unitt) has, once again, done something useful to this end; a big database of suppliers, split by services offered – which can be found here.

Further on that “digital person” point, rarely if ever do I see digital people employed in anything other than an administrative capacity (which this report would back up). I understand that these skillsets (i.e. being able to input on the administrative or creative sides of a company’s activity) are (or can be) quite discrete from one another, maybe that’s because I’ve lived a sheltered life or maybe it’s because, as still seems to be the case, the arts sector very much sees digital as a “marketing thing” that shouldn’t be allowed anywhere near creative practice. Which is a shame and, I think, fundamentally shortsighted. Especially when you get to the point of “distribution”, if you as an organisation have no history or understanding of how to integrate digital into the artistic side of your work then how will you ever be able to meaningfully adopt any form of digital distribution for that work. Anyway, that’s possibly a thought for another day.

Lastly on this particular point, the basics still seem to being ignored on a fairly vast scale:

Whilst this report cannot hide the fact that the sector on the whole isn’t doing brilliantly, there are pockets of good practice. This is usually to be found within organisations who have the time, money, willingness (or a combination thereof) to invest in digital things

A few other (mostly depressing) tidbits:

Hannah Nicklin also had a very worth-paying-attention-to rant on Twitter, a few excerpts below but it’s worth checking her feed for the whole thing:

Live streaming is the least interesting innovative or effective use of digital tech I can think of in theatre. Useful in small circumstances

And the infrastructure required to do it well is huge expensive and labour intensive. Also YOU'RE CUTTING LOTS OF FUNDING

I’d agree with all those points to a certain degree (although I think distribution can/should be important, just the best option hasn’t been cracked yet) and have written about them specifically in the past.

A couple of people also made the point that the model of funding works counter to the low-level, iterative, agile experimentation that NESTA apparently want to see (which, again, I’d totally agree with)

I’m not sure this all tells us much that we don’t already know although I was pretty shocked by the lack of basic activity being undertaken by a significant minority of organisations. Maybe the Arts Council/whoever should be looking to raise the capabilities of the bottom end of the sector before it tries to do anything too fancy, the fact that you still can’t give so many organisations your money via the internet is pretty ridiculous. Narrowing this gap would surely then help to create a more solid foundation from which ‘innovative’ things could be explored. It also seems clear to me that funders should be looking to seed-fund projects which could benefit the whole sector and provide micro-grants to encourage experimentation, whether or not either of these things will actually happen is open for discussion though.

Around some of the issues such as there ‘not being enough/good enough suppliers’ I think there are simple things that can be done, I’m not talking about anything as OTT as the RAR (http://www.recommendedagencies.com/) but maybe something that is trying to achieve similar things, although I do think Chris U has almost achieved this with something a straight-forward as a simple spreadsheet (although why it took Chris – off his own back – to do this – about 3 years ago – is beyond me)