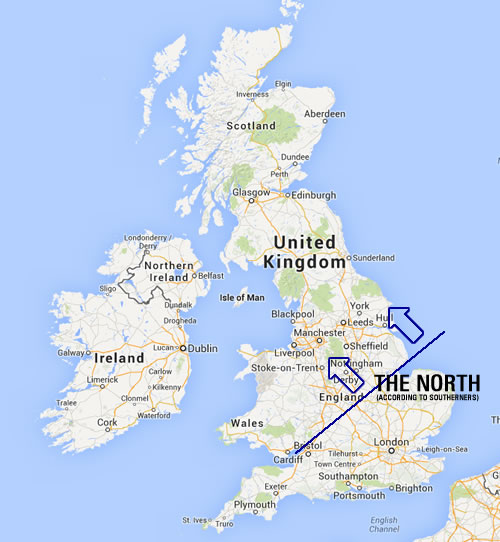 At the end of March I’m moving to London. By the time I move I would have lived in Leeds for the best part of 10 years and I have, unsurprisingly, been feeling a bit sad about leaving the north. So here is a bit of a list of stuff that I’ve liked about/noticed whilst living in Yorkshire.

I was born in London and grew up in towns and villages twenty minutes or so by train from Kings Cross so I am, most definitely, a southerner. I don’t think I had ever really been to The North (as it is referenced on ALL road signs once you leave London), I’d briefly been to Manchester and Nottingham to watch sport, I’d been to Bradford ONCE when my dad worked there for a few months and I’d been to the Lake District a couple of times but I hadn’t really spent any time in any northern cities.

I moved to Leeds in 2004 to go to university and have been here more-or-less ever since.

Leeds has changed so much in the time I’ve lived here. My first year was spent on the south side of the city centre at the – then new – Mill Street halls of residence, near enough to the brewery for everything to constantly smell faintly of a combination of yeast, marmite and stale beer. My flat was on the sixth floor so I had a pretty good view of the, admittedly low-lying and uninteresting, Leeds skyline. The same area now has loads of new hotels, the LCM halls of residence, redeveloped blocks of flats and the brewery itself has been turned into an art gallery.

I don’t think I really explored, or appreciated, the area properly until I had finished uni and moved out of the city to Horsforth (about 5 miles north-west of the city centre). Being slightly out in the suburbs made me realised how brilliantly located Leeds is to be able to easily access the countryside. Within 10 minutes of my front door I could be in the woods and the canal towpath was only a little further away (on which you could walk to Liverpool if you felt like it), the Dales were within half an hour’s drive and it was easy to take in some amazing scenery on a Saturday morning bike ride. It’s also pretty to get north, south and west from Leeds by train.

Someone recently said that Leeds is an ‘easy’ city to live in, I think I’d probably agree with that in so much as it is incredibly compact and pretty well-equipped so that almost everything you need is within easy reach. However it is also a slightly odd, grumpy place that has a fairly sizeable chip on its shoulder when it comes to trying to pull together and get anything done. It is almost like it succeeds (when it does) despite itself. I am also constantly amazed at how, in such a relatively small place (which really does just feel like a big town most of the time) there are so many things going on of which noone really seems to be aware. The left hand rarely seems to know what the right hand is doing, in fact I’m often convinced the left hand has forgotten the right hand ever existed.

However despite that I have loved living here, people get on and get things done, being ‘up yourself’ isn’t tolerated in any way, everyone more-or-less rubs along together without too much fuss and the stereotype of everyone calling each other ‘love’ is completely and gloriously accurate. More recently (over the last 2-3 years) there seems to have been a real explosion of ‘stuff’ in terms of bars, and gigs, and galleries and things opening and happening, I suppose this can only be a good thing. I remember when I was a student the nightlife in the city was fairly rubbish, that could no longer be said to be the case.

It is also nice to be outside the London/South-East bubble just in terms of having a slightly different, more representative perspective of the country you live in.

So, I will miss the people, I will miss the countryside and I will miss being able to get to Edinburgh, Sheffield, Newcastle, Manchester, York or Liverpool easily by train. I will not miss the terrible and expensive transport within the city itself, the inept urban planning and the constant message that Leeds=shopping.

I also hope that, one day, I will be back.